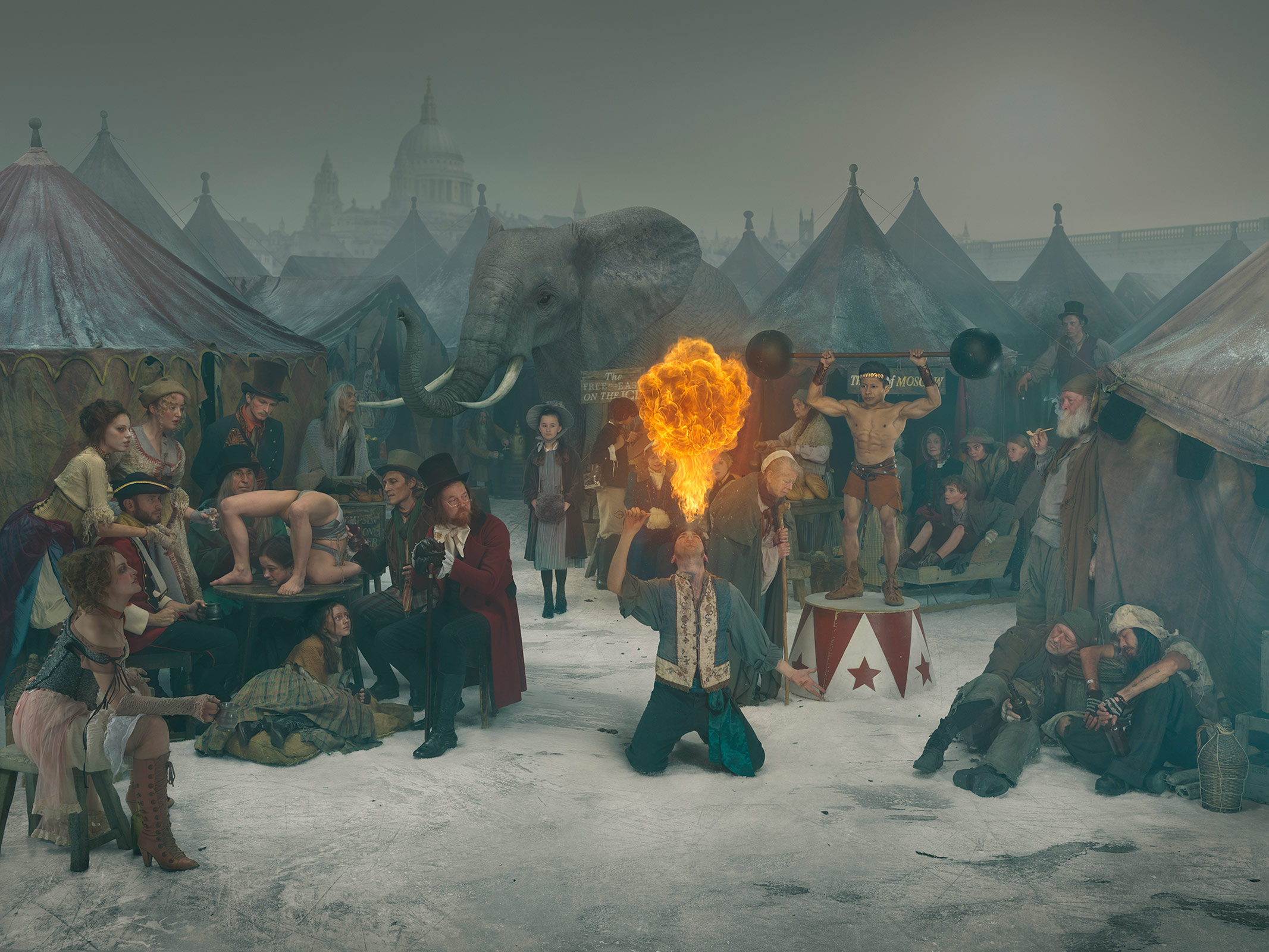 The northern hemisphere was in the grip of a ‘Little Ice Age’ from the 17th century and early 19th century. During this period the tidal part of River Thames in London completely froze over 24 times and on six occasions the ice was thick enough for Londoners to set up tents and entertainment on the ice.

The many narrow arches of the ‘Old’ London Bridge reduced the flow of water and ice was more prone to form. It was demolished in 1831 and replaced by the ‘New’ London Bridge with much wider arches, the water flowed more freely and the river stopped freezing over. The Frost Fair in 1814 was the last one Londoners experienced. It lasted a mere four days but became historically significant when an African elephant was led across the frozen river close to Blackfriars Bridge.

An unusually heavy frost occurred for an entire month from the end of December 1813 to the end of January 1814 when the ice build-up had become thick enough for people to walk, ice-skate or sledge across the river. Watermen demanded a toll for letting people on to the ice to recompense for not being able to ferry them over. London tradespeople grasped the opportunity and set up make-shift tents and decorated them with ‘flags of all nations, streamers and signs’. A street called ‘City Road’ was created. All kinds of entertainment were on offer. Londoners flocked onto the frozen river to enjoy the party.

Kitchens and furnaces were set up offering food, tea and coffee, and naturally gin and beer were in plentiful supply. At every glance, there was entertainment of one kind or other – fortune telling, card games, skittles, horse-drawn sledges, sword swallowers, contortionists, clowns, comedians, boxers and wrestlers, musicians, dancing and also tradesmen selling more conventional wares, such a books, toys and trinkets of all kinds. As well as the tradesmen, pickpockets, gamblers and prostitutes did a roaring trade, especially when visitors got more drunk.

The fair lasted four days, but Londoners enjoyed the merriment to the full. As the ice began to thaw it became unsafe in some places and watermen were paid to lead the revellers safely to the shore again. Despite this, the papers reported that three men broke through the ice and drowned in the freezing water.

From the start the 1814 Frost Fair was a very exciting project to contemplate shooting. It seemed to grow in concept almost daily as I attempted to duplicate as much of the entertainment of that last Frost Fair as possible, including the elephant. When it came to the days of the shoot it was almost the size of a film set; with actors and crew, there were close to 100 people on set at any one time. Because of the scope of the shoot, I decided to shoot both stills and motion. I have now completed the stills; the film will be available soon after editing is complete.