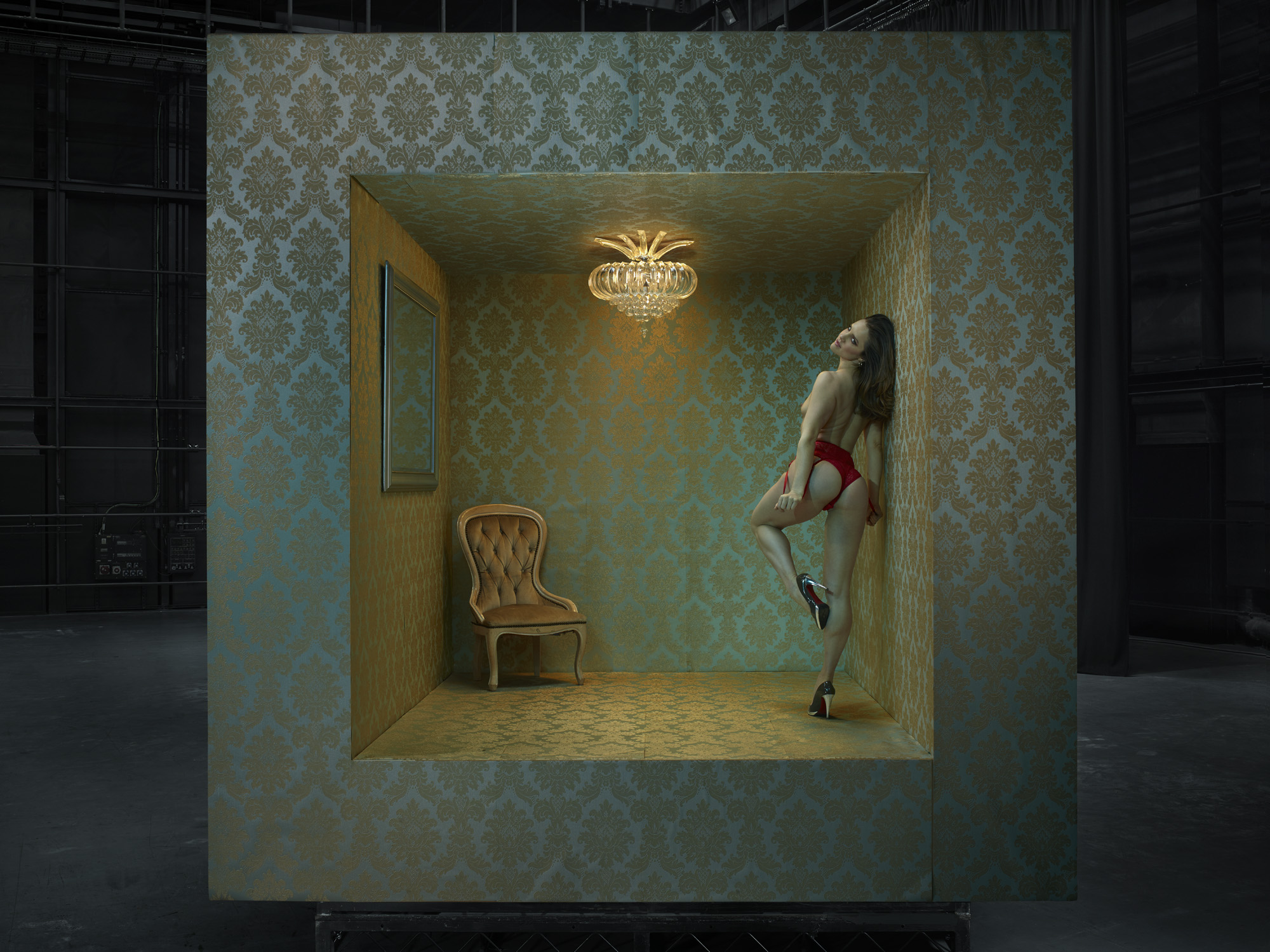 Cathy tells us of the underground world, that despite dipping in and out of it for many years she has never truly left her lifestyle. As a property developer for three years, boasting a bachelor’s degree to her name, brains and drive are not something Ms Keen lacks. Yet the flexible hours, generous wage and supportive family-like environment of the strip club can never be quite matched by the unsatisfying normality of the 9-5 corporate world.

She recalls the beginnings of her dancing days derived from casual hostessing; “We drink with customers and take commission from their bill so they don’t feel like they’re paying for our company.” Whilst it sounds all champagne on ice and wild parties to us, Cathy explains the psyche of the club’s clients, the relationship with her regulars and the role she has acquired as an unqualified therapist.

“In between these four walls…” *points to the black paint between the glistening coloured spotlights of the dark club* “…I connect with people in a way I cannot beyond that steel door. I can slide underneath the exterior shell we build up in the ‘real’ world. You’re automatically unarmed inside here”.

“My job specification isn’t just dancing and stripping. I’m a listener; an agony aunt. I am a constant companion to those who feel alone. I’m not going anywhere or too bored to listen. I’m an outside ear who can provide support and comfort. As a dancer, it’s not like escorting because we can’t fulfill those who come here with sexual frustrations. We just tease and we help those who want to be heard. I actually prefer international rules, which means there can be physical, but not sexual contact. That way I can sit on the client and get close – and as long as they’re respectful of boundaries, you can connect on a deeper level that way; something that truly lends something else to the experience. It’s not graphic, more sensual actually.”

As an advocate for ‘international rules’, we feel obliged to ask the question if Cathy feels attracted to her clients, or indeed if she has ever met a boyfriend at work.

“I don’t have to be attracted or feel chemistry to feel some sort of connection. In fact some are just like mannequins to me. But I do try to ‘like’ all of my customers to make it a positive experience for them. I think that’s really important. I’ve been on two dates with clients. One was terrible and the other was much later in my career and I was deeply connected to that person. Men often try to ask for more – I’m probably propositioned most nights. They’re actually quite creative and eloquent with pushing their luck! I understand though, they want to feel like they got something more, as though I’m providing more than my job requires. I’ve been offered large sums of money for sex in the past, but I’ve never felt the need to go that far. I’m sometimes paid £600 per hour just to talk, so I wouldn’t be tempted by much. Plus I have a good lifestyle where a few grand isn’t going to change my life dramatically. It’s important to know that the girls who do ‘extras’ are tempted by proximity because they want to, not because they have to. Those girls don’t tend to last long as a dancer.”

On the topic of money, what Cathy earns is of course the elephant in the room topic we want to delve into. In the company of such an honest and open character, we waste no time in asking her to expand on the subject.

“There are two types of girl in the stripclub – ‘good time’ girls and girls who want to earn as much money as possible for doing as little as they can. In my experience, strippers are more like the latter – divas! With regards to wages, on a really quiet night if nobody shows up, you can end up in debt to the club. This hasn’t happened to me in a long time, but it can. However, some girls will earn £20,000 in one night if they’re with a customer who is in love with them and willing to part with that kind of cash. I once made £7000 in one night from a regular who didn’t even buy a private dance. Instead I spent time in the VIP suite keeping him company, hoarding his attention all night.”

Since we’ve covered sex and money, our conversation progresses onto drugs. The industry is presumed rife with recreational drug use, supposedly to ‘zone out’ of the infliction of ‘horrors’ from the sex trade. Yet every woman we have encountered thus far, has not once described themselves in need of escapism.

“Drugs play a part in my recreational life. But if we’re only talking work, then no. Even on a separate level to professionalism, drugs shut me down emotionally so I can’t take them at work for that reason. When I’m on a night out, I don’t have to watch my P’s and Q’s or take money from people – I can relax on drugs, but not at at the stripclub. It pays to be focused in the work environment. I can’t imagine that’s exclusive to my job.”

Although there have been times when Cathy has felt like she has no other options, where her lack of professional skills have almost strangled her, she goes on to tell us how much freedom she has had in her life built from dancing; the liberations of independence and self-sufficiency.

“I’m a wife, a mother and trained property developer now, but I look back over the last decade and I remember all the places I’ve been, the cars I have driven and the people I have met. I know it all sounds very materialistic, but it’s more about life experiences to me. I cannot express how intense the comradery is here; the sisterhood amongst the dancers is like no other. We know each other and recognise fragile states and we work through them together. We’re family.”

As a wife and a mother, we had to ask Cathy about her own family. Having already touched upon the pro’s of flexible working hours, we are curious to know if her controversial occupation has ever been an issue to those closest to her. “I was already dancing when I met my partner, so it’s never been a problem because it’s always been a part of me. He knew who I was from the start. Strangely enough, when I had my son, it made me think I was only living for him. But dancing allows me to do something for me and recognise my femininity. I am proud to be independent, but does that make me a feminist?”

“I don’t like to label myself as a feminist because it socially represents the women who have fought to end my line of work – but taking my clothes off for money empowers me. I’m not a victim of anything or anyone. I feel empowered by everything I do. Men enjoy how I look, like I enjoy how other women look, but I’m not sexually attracted to them. Feminists tend to think dancing goes against the equality that women have fought for, but when I can choose to do a job that I enjoy and still earn a substantial wage from doing it – can taking my clothes off really be anti-feminist? There is a kind of ethereal quality to femininity that you are encouraged to promote in a strip club; a type that women aren’t allowed to display in a normal workplace. I enjoy being able to project my gender openly without being judged for it and being supported by not only men, but also the women around me.”

“People find me sexually attractive for my body and sexuality is a great power, not a terrible weakness. I don’t necessarily want to be considered a feminist because I find the inequality between men and women very beautiful. Men have strengths as well as weaknesses, as do women, both in very different ways (with exceptions to the rule). If you try to fight a man in a man’s way, you won’t win…because he’s a man. In the same way a man can’t fight a woman in a woman’s way…because she’s a woman. To me, feminism isn’t about a small group of women deciding what they think is best for womankind as a whole, it’s about being able to make a choice – and stripping is something I want to do. Surely that’s the definition of pro-feminism.”

Standing before us in a red lace bodice, her naturally small breasts and admirable fitness physique already contradicts our misconceptions before she speaks. When she opens her mouth, Cathy is an educated graduate, a mother and a monogamous lover with wisdom beyond her youth-full years. With a captivating understanding of true femininity, culture, society and equality beyond many politician’s capability, clever Cathy is all woman.