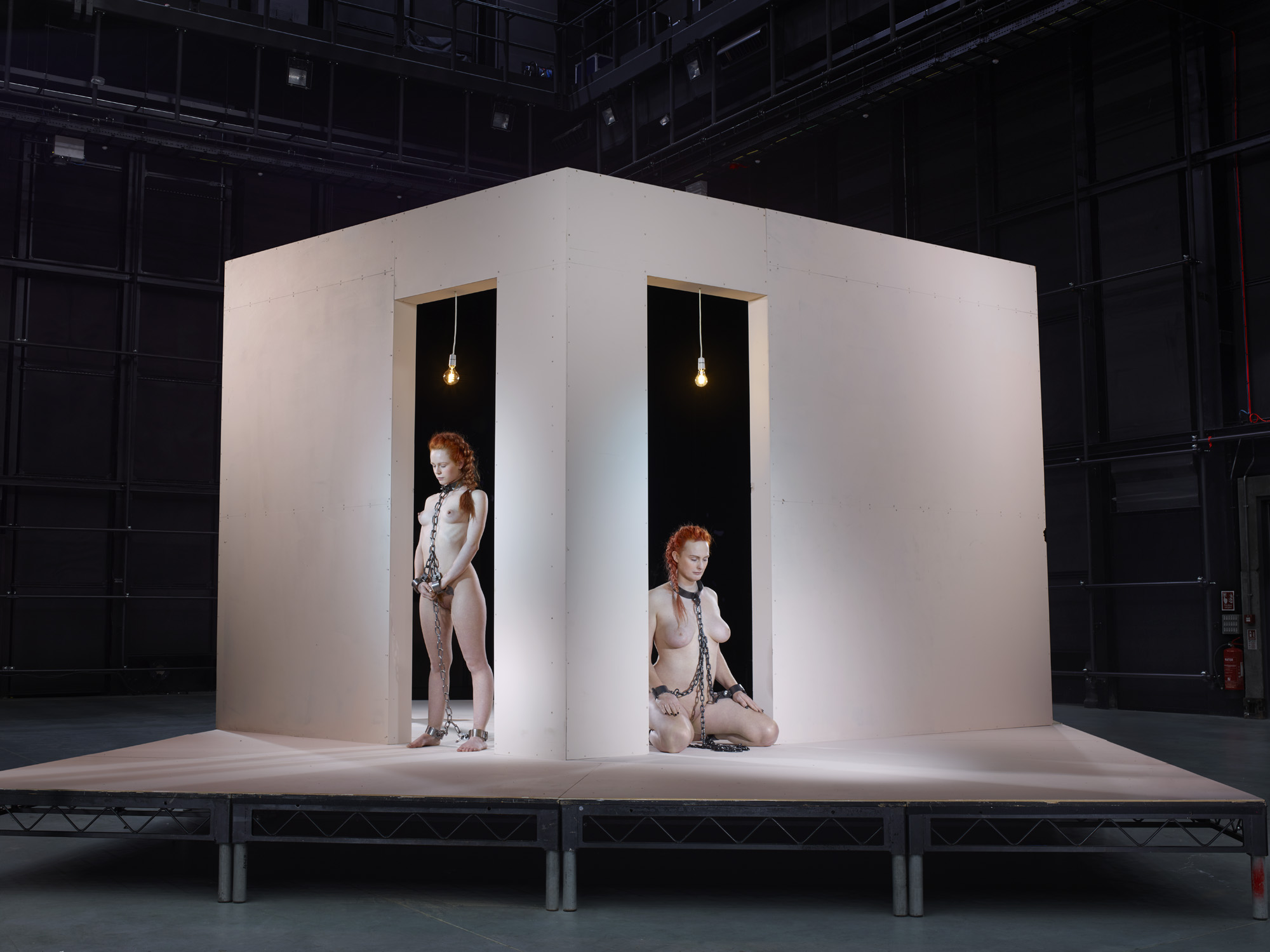 Dripping in steel chains that clang upon even the slightest of movements and a collar that connotes ownership, Chloe Davies and Ella Hughes appear bound by some aggressive force of unwillingness…yet the truth could not be further from it.

Chloe is a lifestyle slave to her dominant. After several months of collar wearing and submissive behaviour, whereby she adopts a slave number instead of a name, the couple began talks of owning another girl between them. *Enter stage left….Ella*.

“Being a sex slave is about living how the dominant dictates.” Chloe says. “Nothing is set. We roll with how her mood is, as and when. That includes clothes, food; how we eat, when we eat…when we go to the bathroom…or not. The initiation process is bigger than a wedding in ways. We look at the collar like a marriage ring.”

To most, the initiation process itself is truly mind blowing. To earn the collar, is what many would consider the most uncomfortable and bizarre part of sex slavery. Of course they vary slave to slave, based on the choices of the dominant. But for Chloe, it involved being boxed up with her head in the ground and just an air hole to breathe, where men were then able to do whatever they pleased to her. This unusual process is unique to say the least and although she describes the experience as traumatic at the time, she admits she felt “amazing” afterwards. Taking pleasure in pleasing her dominant, by giving her body to prove her devotion, allows the dominant to enjoy the mental anguish over the physical with her.

The relationship between the trio is evidently more than just sexual desires and a need to feel owned and submissive. The more the pair open up to us, the more obvious it is that their entire connection is based on mutual understanding and trust; a bond far deeper than most ‘vanillas’.

“Our dom knows our limits, so a safe word isn’t necessary any more. I describe myself as pan-sexual but I prefer women” says Chloe. “But my sexual orientation is determined by my dom. Yeah ok I’m not always in the mood for what she wants when she wants it, but I push through and I realise I love it more when I do. I would have missed out on that in a vanilla lifestyle. It’s not rape – it’s always safe, sane and consensual. I take a great deal of satisfaction by pleasing her.”

Chloe is submissive to their joint dominant (Lisa), yet dominant to Ella as her sister slave. But says she loves them both very much in different ways. “It’s not as much about sex as you would think, more about the mentality and emotions. The sexual pleasure is an added bonus – it’s a lifestyle and you wouldn’t expect to have sex all the time in a vanilla relationship, so it’s no different here. The 50 Shades of Grey fad is more of a bedroom game, this is more how we live every day. The dominant has sex with both of us or we’ll do a performance for her if she wants. So for example, predicament bondage – where we’re tied together and rigged to the ceiling, putting stress on each other’s bodies. If either of us move, it can cause suffering to the other. So it’s about working together not to cause increased pain. I (Chloe) am naturally quite nurturing, so I try to take the discomfort where I can for Ella.”

Of course the concept of the sex slave lifestyle is quite difficult for the vanilla mind to comprehend. Especially when even the sleeping arrangements are not open for debate and are determined only by that of the dominant. “Sometimes we’re all in the same bed, sometimes in a cage, sometimes on the floor. There’s no routine and that’s exactly how we like it” Ella says.

“We don’t get paid. There is no shift end. We’re here because we want to be. There’s comfort in being owned and submissive. That’s all there is to it”.

When it comes to general living, they pool all their money. But where it is spent is decided only by the dominant. Chloe has been mother to their children for last 4 years and maintains that role, whereas Ella is known as a ‘friend’ who lives with them. The pair make it clear that they don’t mix the privacy of their sex lives with the kids, preferring to promote alternative lifestyles as socially acceptable to them. So, although they don’t walk around gagged in chains, they make it known to the youngsters that there are deviations in life to be explored and not rejected with judgement.

“You should always try to explore interests so you’re not missing out, it can be very fulfilling and liberating. I don’t feel like I have to act a certain way to society, yet ironically, I do to my dominant!”

As the pair stand before us explaining their unusual and unique way of life, we realise that their choices really are a physical expression of devotion between three females. There is trust, understanding, real care and above all else – love. What may seem unusual to the vanilla in us all, is quite simply an education of the extraordinary in all variations to these girls.