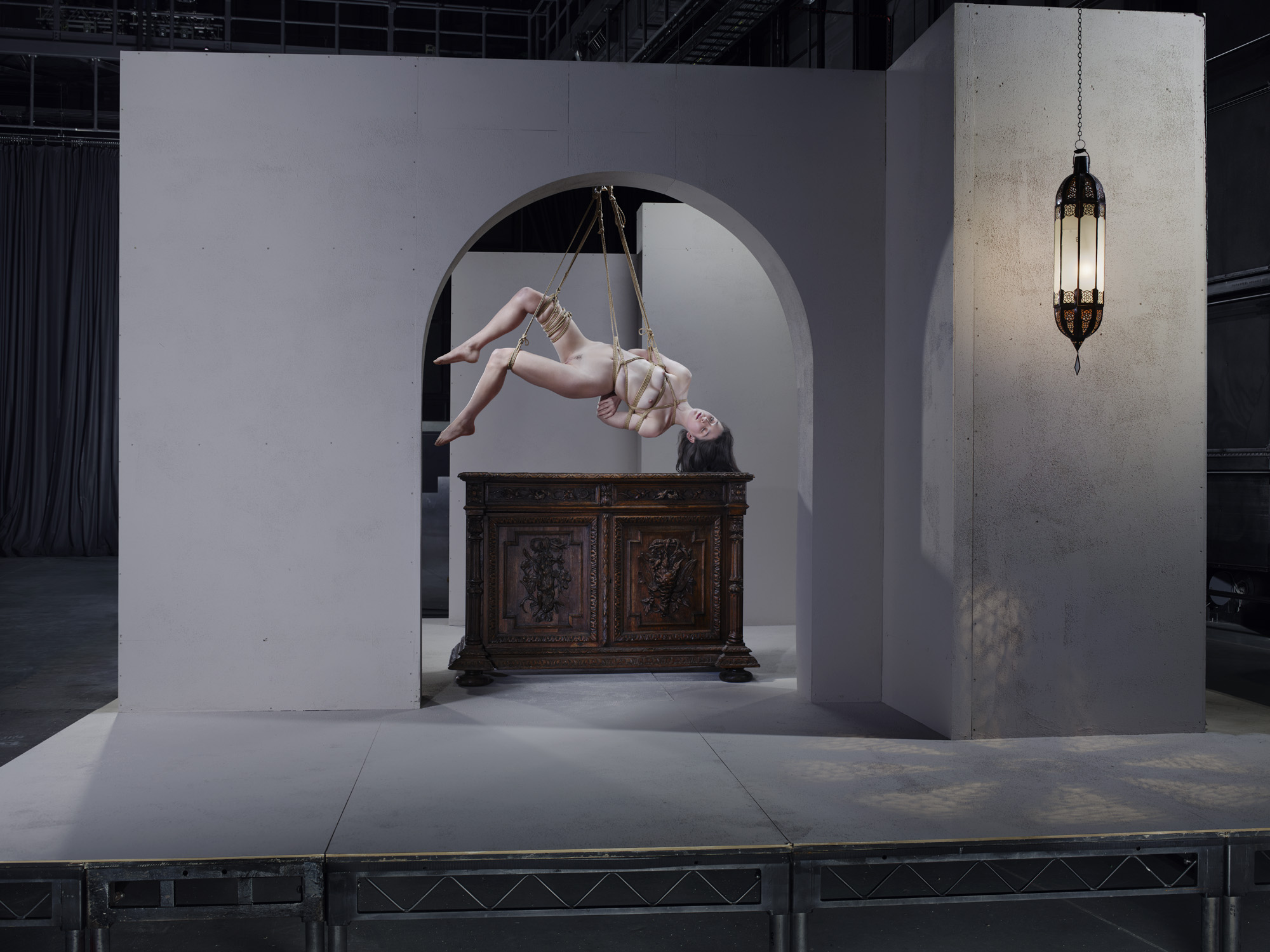 Living in boats, buses and trailers with her performing parents from birth, well-spoken Miss Maisy seems to have only ever known the traveller life. When her mother began her own circus school in Brighton, it triggered a love for aerial contortion and a passion that has evolved into adulthood. Then, aged fifteen, Maisy chose to explore the performance profession over traditional academia, having realised her time as an artiste was greater spent in the air than a classroom. Having attended a few circus events during that time the decision was made by what fed her soul; training became her, and performance became her life.

Once accepted at the National Centre for Circus Arts, Maisy achieved a degree from three years of vigorous circus practice specialising in rope. “I never imagined myself doing any sort of sexual work, but now it’s something I enjoy. I like being open minded, so I focus on sexual aerial acts, like kink and such.”

Kink (spanking, restrictive sex games etc), became part of Maisy’s life when several stars aligned all at once. “I had just come out of a vanilla relationship. It was very loving, but I always wanted something more. I just never realised the ‘thing’ it was lacking, was kink. So when I came out of that relationship, I decided to research my lusts a bit further and pursue what I know now. I met my current boyfriend that way in fact. Then we began to explore it together.”

“For performance, it’s Shibari (Japanese bondage meaning ‘to tie’) as an element of kink that I love most. It’s the pain and restriction, or loss of control, that puts you in a euphoric state of mind. It’s ineffably sublime and almost peaceful with no decisions to make. Imagine just letting yourself…be. It’s not the scary experience one might assume.”

“Having rope bound around you ensures panic by nature, but eventually you’re forced to submit to it. Once you have trained your mind to think in that way, it’s the most incredible feeling of bliss.”

Performing rope acts in this unique way, is quite the opposite to the ‘normal’ aerial work that circus school teaches. Where Maisy’s initial training taught her body about complete control, Shibari has taught her mind to enjoy a complete confliction. “I have trained myself to be able to do both, but I still get the jubilant sense of euphoria I get from kink when I’m in pain with grazes and sweaty from both acts, which I guess makes them quite similar in part”. The natural non-drug induced effect that Maisy describes, somehow makes it easier to comprehend the addiction.

Looking at young Maisy, she’s the last person we’d expect (physically) as a sex worker…and listening to her speak only supports those presumptions. Her incredibly well written blog ‘Dreaming Bruises’ expresses her innate adoration for the industry that owns her, contradicting all prejudice exposed from her refusal of academia. Which leads us to question our self-aware preconceptions…of what actually is a ‘sex worker’? What does a sex worker really look like? Does a sex worker know he or she is one?

“It’s an intellectual interest. I like to watch people’s reactions when I go from being someone who is qutie sensible and innocent, to something a lot more. There is so much to sexuality that fascinates me. I want my work to connote exploring that and challenging the ideas people have, rather than it just being a ‘sexy act’. I don’t really consider myself a sex worker, but not because I wouldn’t want to be…I just feel it’s a bit melodramatic to call myself that. What I perform feels more about the subtleties of sexuality, but I guess I’m still working out if I am [a sex worker] or not.”

Maisy Taylor is beyond most capabilities on so many levels; a strong heart, strong body and strong mind. Her refreshing vision, voiced with hypnotic grace, opens eyes to the subtle beauty of unique sexuality and individual desire – that reaches new altitudes of euphoria. Maisy Taylor; of youth merely in years and of maturity in every other way.