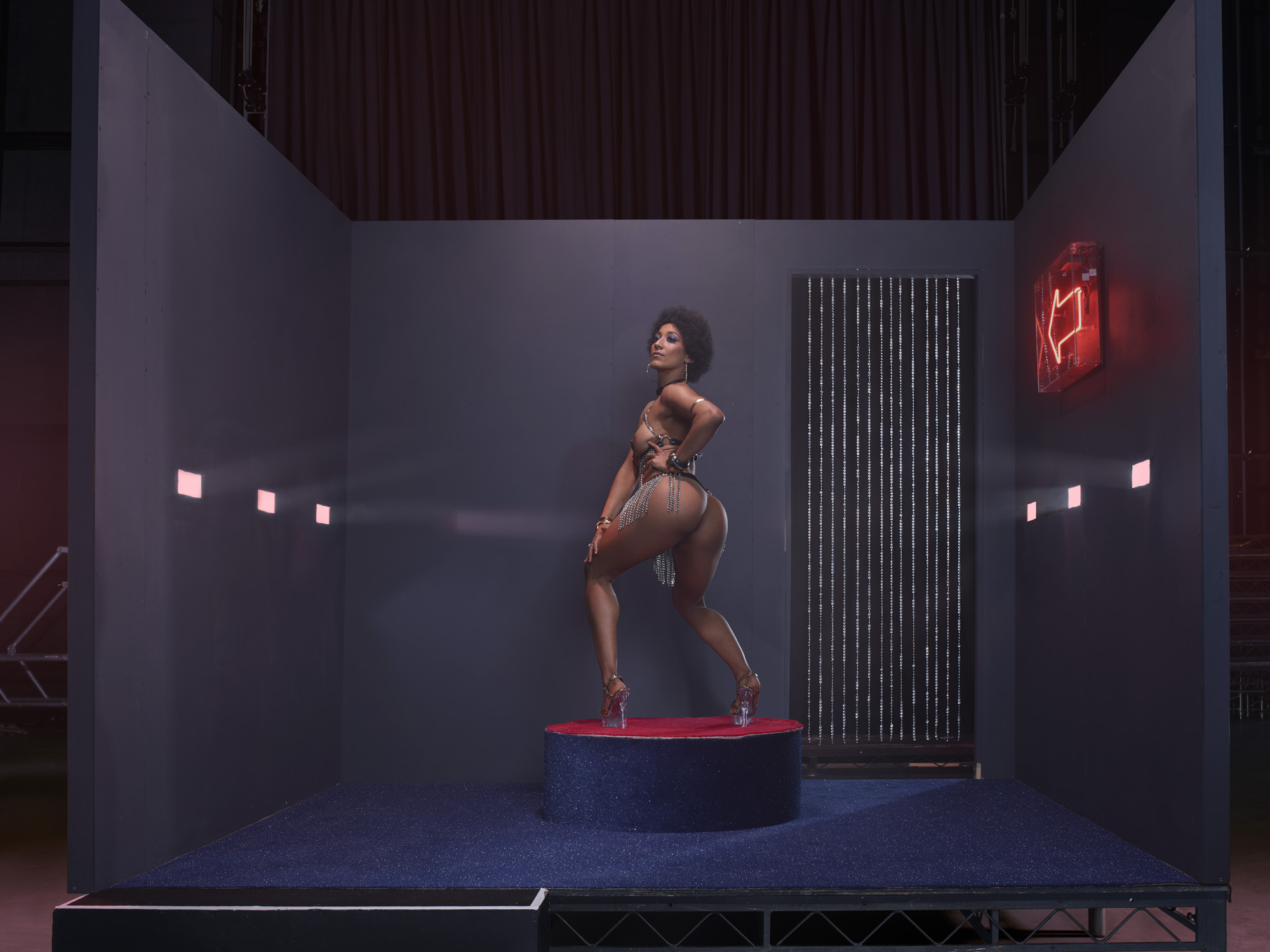 Strong, wild and fierce; student turned stripper, Monique, is Afro-Caribbean by roots but Londoner by nature. Fifteen years after stepping into the dance studio aged seven, her passion for the art of movement, aged twenty-two, is no less than it has ever been.

When Monique began her foundation degree, money seemed to evaporate amidst the cloud of the big smoke. “I like being naked and I like to dance! Bare skin and movement are what I love”, she tells us, thus leading her to fall willingly into the rabbit hole of striptease by default. Dancing for pay, with a decades worth of experience, seemed the logical progression to excel at something she was already good at. However, her natural breasts and beauty, teamed with her bohemian lifestyle, challenges all expectations of the conventional striptease artiste. You would never guess that this city dwelling, trained martial-art artist, who rarely wears makeup, is a poet of love by day, but a seductress of lust by night.

Taking a year on and off work to focus on her studies, Monique claims stripping now acts as a release. Whilst she could still earn a living in retail, albeit far less, erotic dancing allows fast cash and ‘easy’ work for the stripper who once trained as a ballerina. “I didn’t want to consider myself a sex worker at first. But I feel sexual when I dance and I bring that feeling to those who watch me – so maybe I am. Stripping is just a performance. I’m very comfortable being naked, so for me, it’s a liberating experience. I remember my first audition at Metropolis in Bethnal Green – the House Ma’am gave me a glass of wine for Dutch courage. I drank it of course, but I wasn’t nervous!”

“My natural look lends itself to the style, but it can be a hindrance too, because men assume I’ll offer something more than a dance. When you start offering other favours you make people think that strippers are more than a dancer and they’re not. The stripper community is very protective about what we do. The clubs are not brothels in the UK.”

Monique is not the first erotic dancer to speak to us and her understanding of customer psyche is curiously not the first time we’ve heard it. “The whole thing is psychological. you don’t have to be commercially pretty to make the most money. It’s more about how you talk to make them feel good. It’s about making a connection and being confident with it – that’s what makes it something of value. It fascinates me what men really find sexy. For example, men who come in saying they like blondes, often change their mind having spoken to a brunette for a while. I don’t pity the naivety though, I don’t like pitying anyone to be honest. There’s a sexual drive in everyone and that’s what they’ve come for.”

Despite not being considered one of her club’s ‘top earners’ as Monique prefers the more reserved approach, she still manages to rake in an average of £300 in wages per night. “Every night is different and I love that variety. I’ve danced for artists, bankers, musicians, even couples. There’s a very personal element to stripping, as you make a connection with your client. I’ve had some great conversations with people. I once spoke for over an hour with a guy about a philosopher I was studying.”

When asked about home-life, Monique says she feels less inclined to share her line of work with her family, on par with societal prejudgments. “My parents don’t know, but my friends do. I don’t want to tell my mum – not because I’m ashamed, more because I don’t want her to think I’m unhappy or that she failed in some way. I love what I do and I’m incredibly happy. I have to put my happiness first. I’m not emotionally damaged and I don’t have sexual problems.”