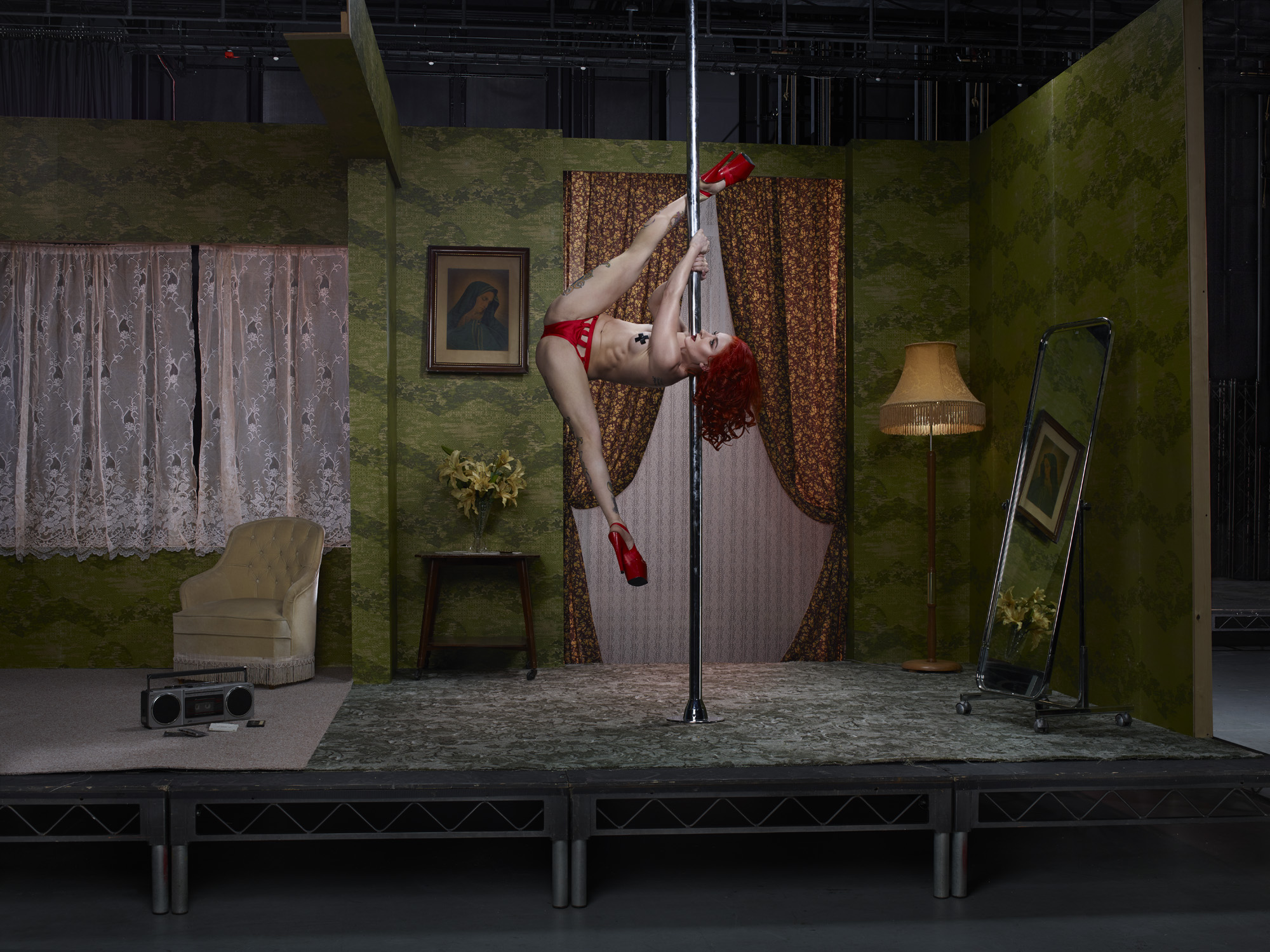 Two teenage girls gathered closely to their Grandmother’s television set with the volume turned down so as not to be noticed. Mesmerised by the spellbinding performance of the Ukrainian dancer wrapping her contorted body around metal enticingly, thirteen year old Sasha Flexy became fascinated with the art of the pole. She whispered an honest declaration to herself and her cousin; “I will be a gymnast like her one day.”

Over a decade later and once labelled ‘dull’ by a deserved ex, Sasha decided to invest in the hobby that had once before caught her attention. She purchased a pole and began teaching herself the technical floor-work and develop the strength required to volley around vertical metal. “If gymnastics and dance had a love child, that hybrid would for certain be pole”, she tells us. “In fact, I consider myself a dancer with superhuman abilities, because some tricks are so demanding that it’s a mutation between gymnastics, dance and eroticism to achieve even the slightest pole dancer pose.”

Certain performances are exceedingly highly skilled in terms of technique and require 100% concentration and focus. So we wonder how a pole dancer can perform such acrobatic talent whilst maintaining the alluring poker face. “I can improvise, but I prefer not to, so I learn the routine so much that I know it by heart. Then once I know it, I enter my own dimension…only then can a dance become erotic. By feeling the music, instead of just hearing it, that is a true art of its own. I believe that any form of dance can be seductive, it just depends to what level you’re willing to take the movement and floor-work. I feel sexual regardless of what I’m doing because I know that being strong is being sexy…and sexy means empowerment, like a goddess.”

On the subject of ‘sexy’, the aptly-named-flexible, Ms Flexy, goes on to say that although most people find pole dancing provocatively appealing, many appreciate more her specialised mastery of dedicated craftsmanship. Where many are simply aroused by the over sexualised movement of a naked body, others admire the sheer strength. “Either they’re turned on or inspired; and neither can ever be a bad thing.” she says. “Men get dirty thoughts, but women are proud to associate that sort of athletic ability with their own gender”.

Sasha began her core muscle training in the Ukraine as an athlete, but became discouraged by her transforming physique as a young adult. “I didn’t like being a teenager in training in terms of my appearance. When you exercise hard, your body changes drastically; it turns you into a machine…and I didn’t want to be a machine. I wanted to be a girl with a feminine body. Pole-dancing gives me both strength and femininity, whereas athletics would have made me into a bit of a man.”

Considering the topic of personal relationships, we’re keen to know how a career as a sex-worker can affect intimate connections. Sasha describes herself as “currently freelancing in the land of relationships”, or “coasting; for now, at least”, saying “it’s hard to find a partner who can accept anti-social hours and work that can be considered controversial. Plus, I need someone reasonably intelligent who can debate with me without becoming offensive. I’d rather be happy and single than have to justify myself. There hasn’t really been any work-induced conflict in my past relationships because I’ve been with men who are quite artistic themselves – so they tend to appreciate the nature of what it is.”

Living as a sex worker has its obvious advantages and downfalls. However, the maintenance of the alternative persona, living the life of an alter ego on stage is a difficulty not many consider. Sasha tells us that she has been on dates with both men and women whom she has met at her show, but must take each interaction as a part falsehood – fearing that they only fell for the person that they watched on the stage. “People offer money for sex to dancers all the time because they think it’s achievable with cash. I think in this day and age we see sex like something you can just buy in a supermarket. Sex is easy to get, but love is much harder to find.”

“For somebody who flaunts their body for a living, you probably think it’s strange for me to need conversational stimulation to find someone attractive. Sometimes you can be with someone because you’re drawn to their looks. But after a while that face becomes so familiar that it’s not so striking any more. Then somebody else comes along with an amazing personality and sense of humour, all of a sudden you’re no longer looking at the body.”

“Everything is a bit of a lie physically; my hair isn’t really red and without makeup I look a bit like an orphan Russian boy called Igor! There is a certain faade behind every performance. Sometimes you’re a bit cheekier, a bit sexier…so if you think you love a dancer, it’s important that you see them away from the pole. I’m a hopeless romantic – I believe a one-night stand can lead to a marriage and that a ten year relationship can deliver nothing more than a broken heart. It all depends on the choices that you make and the people that you meet.”

At the grand old age of barely twenty-eight, Sasha of course has her whole life still ahead of her. However, Miss Flexy dares not speak of an existence without dance, claiming to be the happiest she can possibly be with her beloved pole. “I know my schedule this year and that’s good enough for me, I can’t think of anything beyond that. I hope I can do this job for a very long time. Maybe I’m too hopeful…but one can wish. It depends how you look physically, but even more so mentally. Mind over body is happiness. There is always room to advance from performance to teaching others. There is no end-goal for me to seek a way out, only progression from within”.

“I’m not sure if I’m knowledgeable enough to say what it means to be a feminist or even if I am one. However, what I can say, is that I value the opinions of any gender. I don’t think either gender should put the other down. Men and women are so different that it’s hard to decipher if one opinion is more valid than another. Sometimes I hear a woman speak and I’m so embarrassed to be female because of what she’s saying…but then I hear a man say something stupid and I’m pleased I’m not male for the same reason! I think validity of opinion is based on individual personalities rather than gender specifics – so neither one can be above the other as a collective. If we’re honest, in every gender there’s a dickhead.”

To us, Sasha is a ball of muscular femininity and fascination with fire-coloured hair and in hot pants. Her personality is as strong as her admirable strength and her vision of true love is as sweet as any fairy-tale, proving that the sex industry does not break nor desensitise all of its female workers.