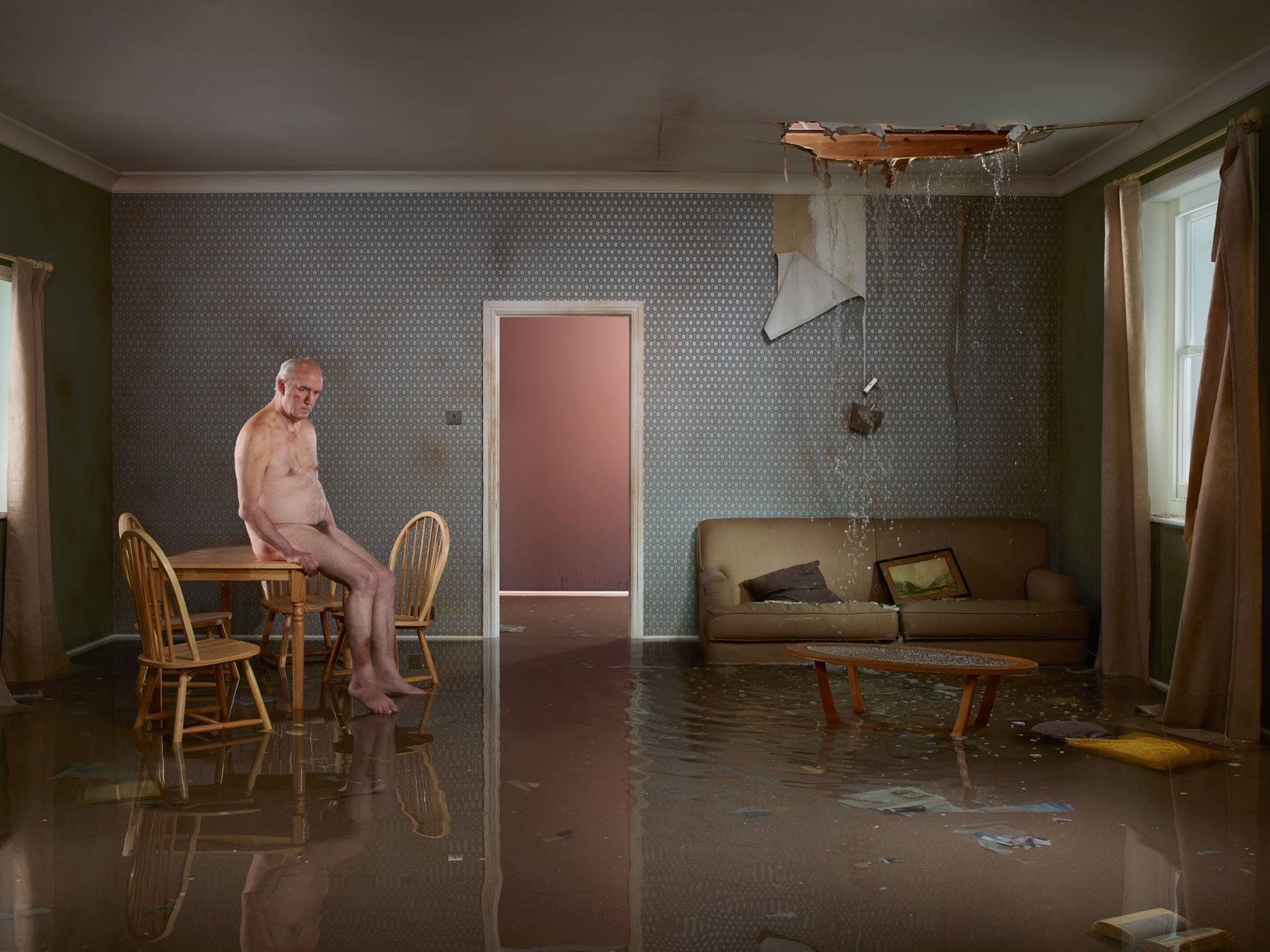 19th January 2016. I am on the train to London. I am on my way to a shoot for which I have waited a long time. A shoot with Julia Fullerton-Batten. We have emailed each other over a period of almost eight years, we have met in a cafe in Chiswick where we clicked immediately. She has made some interesting suggestions but, finally, when it comes down to it, she has really only got…..me. But she understands me and that is why she made the suggestions in the first place. Now, she has a set all ready for another shoot with a corporate client but which she feels will tell something about my story. She has warned me that I shall have to walk in freezing cold water with nothing on. She is very concerned for me but I have reassured her that it will be fine even though I have only recently recovered from my first bout of Cellulitis. I hate getting old, physically old that is. My doctor said recently that it is better than the alternative. I suppose that she meant death. Maybe.

Anyway, let’s not get maudlin. I reach Victoria and travel by tube to Kennington where I had been only recently for a shoot with Kasia Wozniak. Although Julia’s shoot will be in a different studio, I walk up the same street from the station and I find the place and walk inside. The place is packed. There must be at least thirty people there either on computers or adjusting lights or parts of the set which is enormous. As I walk into the room, it slowly comes into view. It is a room in a house, a sitting room with a hole in the ceiling and water about a foot deep on the floor. Clearly a pipe has burst or some other similar catastrophe and there are two actors or models pretending to be the couple returning to their lovely house. There are two guys wearing waterproof clothes wading into the water and moving furniture and other props around and pouring more water through the hole and, in the middle of all this clamour and activity, standing behind her camera like a modern day Queen Boadicea, barking orders with her long golden hair flowing, is Julia. She looks magnificent. She receives me with a hug, the warmth of which recalls our meeting in Chiswick. She explains that they still have a bit to do and suggests that I sit at the side and watch them finish the shoot while I drink the tea that her very friendly assistant has made for me. It is fascinating seeing how it all works on such a scale.

After a while, they begin to set up some final shots and Julia comes over to talk about what she has in mind. She is worried that I might be too cold but the studio itself is very warm. We discuss her ideas and then she returns to her chariot and finishes it all off. I am then introduced to the make-up artist and her assistant who put a bit of make-up on my face. I take off my clothes and put on a robe and wander out on to the set. There I remove my robe and step tentatively into the water which is not as cold as I had anticipated but Julia is still very concerned and asks one of her team to help me over the edge of the set and into the water. We try various shots including one of me pretending to pee into the water. I ask her if she would like me to stand on the table. Yes she would and slowly, I climb onto a chair and then onto the table and kind of wished I hadn’t as I feel a bit unsure but, at the same time, I kind of love it because it proves I am not a complete spaz. Then Julia calls me down and I climb out of the water and we look at some shots on the computer screen. They look interesting but, without glasses, I cannot really tell what they are like but I know from Julia’s work that it will look tremendous. She asks me if I mind returning to the set and, after a quick muse about Catholicism and the Pope, I do a parkinsonian version of a leap back into the water and we try some more poses. Then Julia calls time and I am moved as everyone applauds.

I feel great. I have been photographed by Julia Fullerton-Batten, photographer par excellence. I have been photographed by Julia Fullerton-Batten, a lovely warm and kind woman. It is the latest of a long line of wonderful shoots and experiences. It is one more step on an incredible journey that I could never, ever, have anticipated on which I would travel. On this day, eight years ago, I was seeing clients and trying not to shake behind my desk. I was battling with the worsening symptoms of this condition and it was about this time in 2006 that I wrote to my senior partner finally acknowledging that my legal career was over. I put the letter in the post and then telephoned him at home and burst into tears as I told him that I had to go. It was so difficult to give up, to give in but little did I know what it would lead to. Me, naked on a set surrounded by water and people assisting one of the greatest photographers of our generation, Julia Fullerton-Batten. My friend, Julia.

As for the photograph, well, need I comment? It is wonderful, of course. I am sitting there with one foot trailing in the water thinking ‘…what the fuck…’ When I had my Deep Brain Stimulation surgery, I felt that beforehand, I had a large lake to play in which I was invited to play but that, bit by bit, the area I was allowed to play was getting smaller and smaller, eventually leaving me with a small area fenced off. Then, when I left hospital, I was told that the fence had been removed and that I could play wherever I liked. Whooaa! This photograph shows that that was not as easy as it seemed. My illness has taken me to places in my mind that I have never been to before. Not all good but not all bad. But on 19th January 2016, I went to London and was photographed like this. How cool is that?